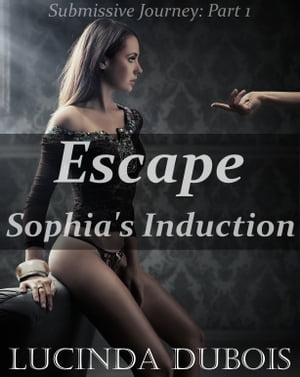 When Sophia’s boyfriend forces her to commit a crime, the only place she can run to is the dark dungeon of her unknown neighbor. Sophia’s eyes are opened up to a while new world of dominance and submission as she seeks shelter in this safe house. Both her fear of the police and of her new Master keep her emotions in check, but will her body let her explore this new side of her sexuality? Watch as Sophia changes from a hardened abused girlfriend to a feisty and tempting submissive in Escape: Sophia's Induction (Submissive Journey Part 1). Length: 6600 Words Adult Reading Material (18+) This book is for mature audiences only and contains sexually explicit content. Excerpt: “It must be someone’s summer home,” she told herself aloud. She wandered around the room and sat her bare ass on the soft couch. Sophia heard a dull pounding. It repeated over and over. She assumed it was her own heartbeat in her ears, but she soon realized that it was a sound emanating from a room upstairs. Her stomach dropped – someone was here. She paused for a moment, debating her options in her head. She rose up and walked to the bottom of the stair case. The sound continued, rhythmically, almost mechanical. Slowly Sophia climbed the staircase, stopping at each step to see if the sound had stopped, hoping it would give her advanced notice of someone approaching. When there was no break in the sound, and she had reached the top of the stairs, she turned her head to zero in on the location of the noise. Tiptoeing down the hallway, she stopped at the room that held the noise inside. The sound had changed, from the muffled pounding that reminded her of an unbalanced washing machine to a more distinctive smack. She heard a noise that almost sounded like speech – like a whimper or a cry that couldn’t quite escape a pair of lips correctly. The door was slightly open. Sophia’s curiosity got the best of her. She ran her cold hand down the side of the door. It flew open much faster than she had anticipated. A body greeted her – a wall of flesh that took her by surprise. Her own reactions cast her back – losing balance and falling flat on her still-naked ass. She looked up at the man standing before her, glaring down at her with a pair of eyes that were a mix of confusion and anger. He closed the door behind him. “Can I help you?” “I… I...” Sophia paused, trying to scan her mind as to what to say next. “My boyfriend tried to kill me while I was in the tub. I ran from the house and through the woods. Your house was the first one I came across.” She purposely forgot to include the whole ‘running from the cops’ scenario. Helping a naked woman who ran from death is one thing. Harboring a fugitive from justice is another.