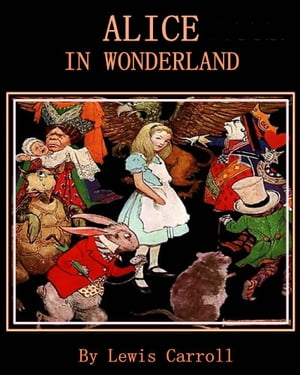 Alice in Wonderland This book include Lewis Carroll’s biography and his works. The book begins with a young girl, Alice, bored whilst sat by a river, reading a book with her sister. Everything seems perfectly normal and serene; there could be nothing more in keeping with the bourgeois Victorian world in which Carroll lived. Then Alice catches sight of a small white figure, a rabbit dressed in a waistcoat and holding a pocket watch, murmuring to himself that he is late. Alice runs after the rabbit and follows it into a hole. After falling down into the depths of the earth she finds herself in a corridor full of doors. At the end of the corridor there is a tiny door with a tiny key through which Alice can see a beautiful garden that she is desperate to enter. She then spots a bottle labeled "DRINK ME" (which she does), and begins to shrink until she is large enough to fit through the door. Unfortunately, she has left the key that fits the lock on a table, now well out of her reach. She then finds a cake labeled "EAT ME" (which, again, she does), and is restored to her normal size. Disconcerted by this frustrating series of events, Alice begins to cry and, caught unawares by a change in size not precipitated by food or drink, she shrinks and is washed away in her own tears. This strange beginning leads to a series of progressively "curiouser and curiouser" events, which see Alice baby-sit a pig, take part in a tea party that is held hostage by time (and so never ends), and engage in a game of croquet in which flamingos are used as mallets and hedgehogs as balls. She meets a number of extravagant and incredibly characters--from the Cheshire Cat (whose habit of making enigmatic pronouncements is only matched by his tendency to disappear) to a caterpillar smoking a hookah, and being decidedly contradictory. She also, famously, meets the Queen of Hearts who has a penchant for execution (almost continually proclaiming of those who she does not like, "Off with their heads").