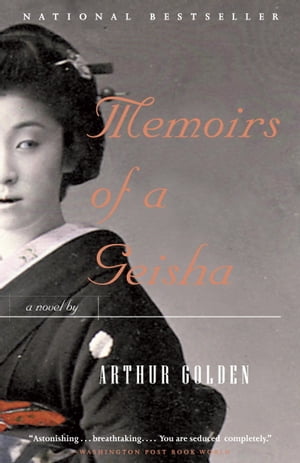 A literary sensation and runaway bestseller, this brilliant debut novel tells with seamless authenticity and exquisite lyricism the true confessions of one of Japan's most celebrated geisha. Nominated as one of America’s best-loved novels by PBS’s The Great American Read Speaking to us with the wisdom of age and in a voice at once haunting and startlingly immediate, Nitta Sayuri tells the story of her life as a geisha. It begins in a poor fishing village in 1929, when, as a nine-year-old girl with unusual blue-gray eyes, she is taken from her home and sold into slavery to a renowned geisha house. We witness her transformation as she learns the rigorous arts of the geisha: dance and music; wearing kimono, elaborate makeup, and hair; pouring sake to reveal just a touch of inner wrist; competing with a jealous rival for men's solicitude and the money that goes with it. In Memoirs of a Geisha, we enter a world where appearances are paramount; where a girl's virginity is auctioned to the highest bidder; where women are trained to beguile the most powerful men; and where love is scorned as illusion. It is a unique and triumphant work of fictionーat once romantic, erotic, suspensefulーand completely unforgettable.