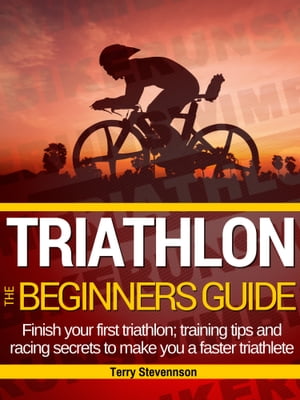 Finish Your First Triathlon and Impress the Doubters Who Said You Couldn’tVeteran Triathlon Coach with students in over 35 countries across the globe wants to add you to the First Time Finishers List.Are you thinking about getting into triathlon or attempting your first race?Maybe you’re curious about this whole “Triathlon” thing and want to know if its right for you?If you&amp;apos;ve ever thought about doing a triathlon, you’re in the right place.Triathlon: the Beginners Guide Will Be Your Trusted GuideTriathlon can be confusing.  Let me help you get started. Don’t be intimidated by skinny 20-somethings squeezed into lycra.Don’t rush into dangerous amounts of joint-pounding training; risking your health.Don’t be fooled into buying tons of expensive and unnecessary equipment.The Beginners Guide will act as your road-map to Triathlon success.  It covers every aspect of your triathlon, including:which Triathlon distance is right for youhow to swim and get over the fear of swimming in open-water, away from the safety and familiarity of your local pool.becoming a fast (and safe) cyclist, without spending thousands of dollars on a professional-grade bikehow to run after you’ve just finished an instense bike ridewhat to look for in a triathlon training plan, and how to tell if you should tear yours up on the spotwhat you need to eat and drink; before, during and after your racehow to put it all together in the intense “transition area” andhow to survive race day nerves and the complex logistics of a triathlon race site.I’ll Also Reveal these Nuggets of Triathlon Gold; Earned from Over 25 Years of Triathlonthe same “Six Periods of Training” I use with my $1000 per month one-on-one studentsthe simple truth about structuring your Triathlon training . . . no math formula or science PhD requiredwhy “standard” advice about open-water swimming will leave you gasping for air while others swim over the top of youthe most powerful cure for fear of swimming ever known . . . and why it’s easier to fix than you’ve ever thought possiblethe single little-known secret of triathlon training to dramatically reduce your risk of injury . . . by up to as much as 90%the only list you’ll ever need for all your Triathlon planningwhy most Triathlon coaches are 100% wrong in the way they approach race dayhow to avoid the embarrassing mistakes even veteran triathletes make on race dayStart Your Triathlon Journey TodayTriathlons the Beginners Guide is everything a new triathlete like you needs to prepare for your first race and enjoy your first triathlon.  Cut through the confusion and guarantee a fun and successful first triathlon by getting your copy today.About Terry StevennsonTerry Stevennson has seen it all in Triathlon.  Older than he’s willing to admit, Terry has helped thousands of folks just like you get over their first triathlon nerves and arrive at the Finish Line with a smile on their faces.