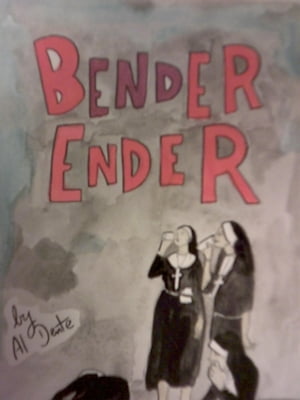 For exactly 5 years, The Gallery At The End Of The World in Altadena, CA was the center of the world for a ragtag group of young artists who met there and strode together into the wilderness of the L.A. "underground" art scene. There was nothing overly dramatic about how it all ended. The lease just ran out and owners decided to sell the building we were in. Now it&apos;s 5 years later and that same building remains empty and weeds have overtaken the Padio and the old stage where bands used to play. But for those 5 years (and 5 more before that when it was Underground Arts Society) we had a helluva time. And since the walls can&apos;t talk, they can&apos;t tell the stories of all that went on there. But I can. "Bender Ender" is one of the "lost Artbenders", the Artbenders being a series of stories I wrote about the slightly legendary 4-day-long Artbender Weekend art openings that we&apos;d have every 2 to 4 months. Most of the Artbender stories were published as little booklets and available for purchase at the gallery. But that are 2 "lost" Artbenders that I wrote and edited that for whatever reasons were never published. The other was called "Life Would Be Golden", which I&apos;ll try to upload next-- and there&apos;s was actually going to be a last-last one called "Ender Extender" that never got finished-- but for now, here&apos;s the very last one: Bender Ender.