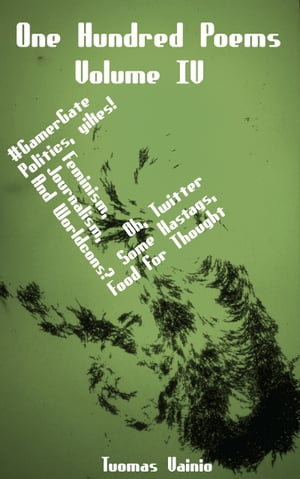 I set myself the goal of writing 1000 poems, about one per day, and this is my fourth volume towards that specific goal. This collection is by no means an autobiographical diary with any quantity of accuracy, but I cannot deny how these poems wouldn’t have a specific reason why it particularly was written on that very day. The topics I handle can be summed up as popular culture, events, politics, memes, and even controversial issues with controversial stance. Hence the poem tittles may seem spot on or even entirely misleading. Anyhow, this volume contains the following poems: 'Festival of Dangerous Idea(logue)s' The Shepherd's Crown Yi-Fen Chou 'Free Speech Fundamentalist' On That Third Party Troll Dammit honey The obscurity of self publishing That Skull of Mine Living in denial #PC Principal The Three Stories Before Me Beetroot Hamburger Baby Penguins Job Interviews: Awkward Flirtations of Denial A book that remains unfinished #ShoutYourAbortion? 'S' On My Forehead (For a Superhero Novel?) Nigga Fried Chicken (NFC) “Cyber VAWG?” Kollektivet Music Video: 'Kygo's Confession' Feminists and Sex Robots Accusation: Rape Apologist Finland's 'Ruined' Reputation Trains and Snow Mustard Words Have Meaning Aftermath of a Shooting That No Man's Sky (For science fiction novel) The Amber Rose Slut Walk The First Day of Autumn The life as it is #NationalPoetryDay The perks of being an art teacher The Martian A Queen's Buttock (For a fantasy novel) Comment Sections My role in #GamerGate? Death of a Computer UN picks fight with gamers? Jar or Pickles The news of today A poem a day Battle of Ideas #CocksNotGlocks? The Canadian Prime Minister 'Mean' Kiss of a Rose (For a fantasy novel) Trailer: Star Wars – The Force Awakens #SavePoint School Attack in Trollhättan No poem today Priorities Online Fish Bait An update on #SavePoint Lardship Troopers Hello (For A Science Fiction Novel) Paedophilia #SavePoint is back, sort of? #OpForgive When the word 'too' is too 'sexist' Jessica Jones – Purple Man Supergirl I do not feel like thinking And something slightly more joyous People Online “#GamerGate movie” Super Cheese Bacon Hamburger A poem in ten in minutes “69” Orcas in Plastic Bags Unbearable Honey Peach Flavoured Ice Tea Aftermath of Paris #SavePoint, A Full Circle Of boxes of chocolates and jars of jalapeños Fallout 4, an author's bane Sköll (For a Fantasy Novel) #IStandWithStarkey Where are you dogmeat? When snow and rain fall #Freedom of Tweets Feminists and Daleks, kindred spirits Yar-har Dead or Alive, a volleyball game Twenty-eight words At the 'end' of Fallout 4 (Spoilers, duh.) Just Dance Fallout 4 - Road Goggles She cannot ride a bicycle Realistic Fish Pencil Case Midnight Cleaning “On the right side of history” Twitter's Censorship Say it again Love of All Things Die Clara Die, on Doctor Who The Modern News of the Political Left December Rains That Malaysian Prime Minister And a fourth hundred