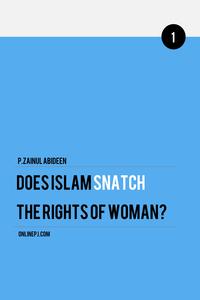 DOES ISLAM SNATCH THE RIGHTS OF WOMEN? In this book, all the accusations concerning the woman are answered in detail. Moreover, a question is put forth “why did Prophet Mohamed alone marry more woman than other men?” To answer this, a separate book is published. It was titled ‘why did Prophet Mohamed marry more woman’ Accusations such as Jizyah, war against non-Muslims, worshipping Kaaba, worshipping direction, and Muslims are intolerant are answered in the book titled ‘Accusations and Answers’ The book ‘Meaningful Questions and wise Answers’ answers the logical questions raised by Non-Muslims. Those, who read all these 4 books will get answers concerning all accusations alleged against Islam.We find so many religions in the world. Each and every religious scholar claims, what he follows, is the best among the available religion. He preaches it too with his staunch belief.However, the thinkers accept Islam is better in many aspects than any other religions of the world. Islam is not only explaining the method of worship but also explain guidelines for all aspects of human life. Islam takes care of human problems and intrudes in it. Moreover, Islam is the advice and apt solution for all the problems of life. Islam is the protected religion and it shuns any corrections from the day of its introduction. Till today, the religious book of Islam, Al-Quran only is not defamed by the human hands.Those who certify the goodness of Islam also are dissatisfied about some laws of Islam. In this juncture, it is the duty of a Muslim to analyze their doubts and clarify it logically and convincingly. Islam is not only the religion of the Muslims but also whole human race. For, it has come from the creator of the universe. Therefore, I have written this book to answer for those who accuse listing the aspects which is against woman’s rights. For other accusations, answers are published in two volumes. Those who read all these three volumes can find answers for all accusations against Islam.This book is compiled to clarify the doubts of Non-Muslims and let us pray Allah to fulfill that aim. With Love,