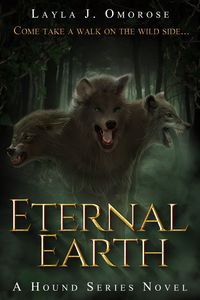 AN OBSESSION HE COULDN'T CONTROL... For over a year, Adien, the Trinity Hound of Earth. has watched Harmony Sonders from a distance. Silently protecting her from his enemies and those who sought to harm her...including himself. One look from her is enough to have him longing for the one thing he never wanted but the only thing he needed... his fated mate, a woman whose touch shook him to his core and had the power to shatter his carefully constructed world. A MAN SHE DARED TO TAME... Harmony Sonders has spent the last few years piecing herself back together after escaping a marriage that nearly killed her. With her life finally where she wants it, the last thing she needed was for another man to come and throw her world into chaos... and that's exactly what Adien Tygerian does. A wicked temptation, he awakens a side of her she didn't know existed... a piece of her that demands she claim what is rightfully hers and damned the consequences. A DESIRE THAT WILL ROCK THEIR WORLD... With their enemies gathering their forces and the birth of a new power at hand, can Adien and Harmony break down the walls that guard their hearts and take hold of a love like they've never known to protect the ones they love or will the ghosts of their pasts lead to their damnation?