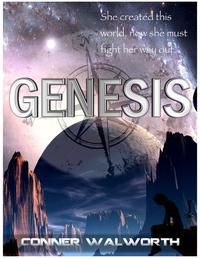 Sasha is the youngest scientist of this new generation and has pioneered the way to a whole new level of genetic engineering… but little does she know, that’s going to spell trouble. After countless years of hard work at Gentec Laboratories, she’s made an amazing breakthrough. Sasha has created her own strands of DNA, not just from current species, but ones that have been long extinct. Her specialty: predators. Just as things are being finalized on her latest creation, she wakes up in a forest with no memory of getting there. It takes only seconds to realize she’s no longer on Earth, and even less to realize she must fight to survive. While exploring, she meets a friend, and together, they agree to go on a journey to escape this planet. The only thing is, the further they travel, the more Sasha begins to realize what this place could be. Doubt seeps into her mind, and not just about making it home, but what she did before arriving here. This strange planet is breathtaking, but danger lurks in every shadow, waiting to pounce out and steal a life. They’ll need more than skill to escape this place, they’ll need luck and a lot of help. Some of that is found along the way, but with it comes secrets from the past and dire warnings of what lies ahead. Can these two, a scientist and a hunter, make their way off this harrowing planet alive? An incredible, and terrifying, adventure lies ahead!