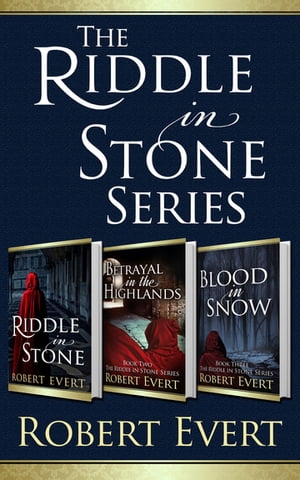 Riddle in Stone, Betrayal in the Highlands, and Blood in Snow

The Riddle in Stone Series

Three fantasy novels in one volumeーthe saga of a humble librarian who becomes a hero in an epic battle . . . The Undead King is stirring again, amassing a goblin horde ready to sweep out of the mountains and destroy all of humanity. The only thing preventing utter annihilation is Edmundーa stuttering librarian who knows a secret, a secret that every thief, assassin, and king would kill to have. Over the course of a thrilling trilogy, Edmund will face adversaries ancient and relentless, fall in love and endure betrayal, lead his own kingdom, and enter into a battle that will determine the fate of man forever. With breathtaking suspense and imagination, Robert Evert has created a series that will enchant readers for generations.