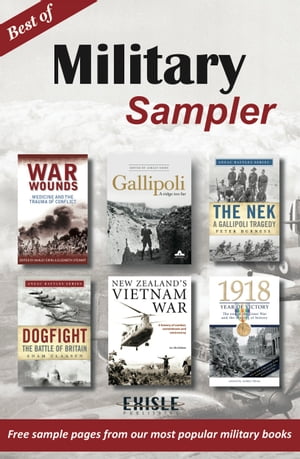 Internationally recognised for publishing a range of military books written by Australian, New Zealand and International authors who, as experts in their fields, provide an absorbing insight into great and modern wars and their after effects. Exisle is proud to present a selection of extracts from a few of our bestselling titles. Featured titles include: War Wounds: Medicine and the trauma of conflict edited by Ashley Ekins and Elizabeth Stewart; Gallipoli: A Ridge Too Far edited by Ashley Ekins; The Nek: A Gallipoli Tragedy by Peter Burness; Dogfight: The Battle of Britain by Dr Adam Claasen; New Zealands Vietnam War: A history of combat, commitment and controversy by Ian McGibbon and 1918 Year of Victory: The end of the Great War and the shaping of history edited by Ashley Ekins. The extracts are designed to give you an introduction to our range of books that are receiving both critical and popular acclaim. Exisle is a successful independent publishing house that prides itself on producing high quality and informative books. We hope you enjoy this introduction to the Best of Military from Exisle.