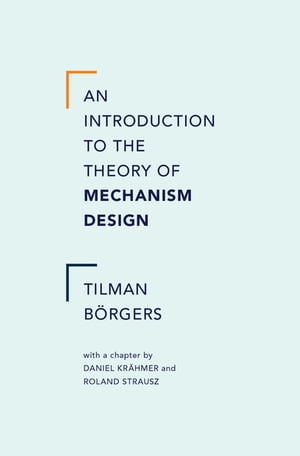 〔電子〕An Introduction to the Theory of Mechanism Design

What is the best way to auction an asset? How should a group of people organize themselves to ensure the best provision of public goods? How should exchanges be organized? In An Introduction to the Theory of Mechanism Design, Tilman Börgers addresses these questions and more through an exploration of the economic theory of mechanism design. Mechanism design is reverse game theory. Whereas game theory takes the rules of the game as a given and makes predictions about the behavior of strategic players, the theory of mechanism design goes a step further and selects the optimal rules of the game. A relatively new economic theory, mechanism design studies the instrument itself as well as the results of the instrument. An Introduction to the Theory of Mechanism Design provides rigorous but accessible explanations of classic results in the theory of mechanism design, such as Myerson's theorem on expected revenue maximizing auctions, Myerson and Satterthwaite's theorem on the impossibility of ex post efficient bilateral trade with asymmetric information, and Gibbard and Satterthwaite's theorem on the non-existence of dominant strategy voting mechanisms. Börgers also provides an examination of the frontiers of current research in the area with an original and unified perspective that will appeal to advanced students of economics.